About a year ago, Miya Folick released the music video to “Give It To Me”, the lead single off of her eponymous Give It To Me EP. The concept–which finds Folick singing and screaming on a roller coaster–wasn’t new. It never extended itself beyond that simple premise. And after sitting on YouTube all this time, the video didn’t crack more than 65k (at the time of this review) either. But in my opinion, it’s perhaps the best thing that Folick’s released so far.

“Give It To Me” is stunning, striking, and most importantly–unforgettable. It introduced the world to Folick and her artistry for the first time, even though she’s been making music for about two years before its release. It announced the arrival of a young woman who seemed destined to make it big, just from that one video. And that voice. That voice! “Give It To Me” is a song that shows off Folick’s incredible range, one that is dynamic enough to hit the highest of highs and lowest of lows all in one song. With a vocal ability that can be comparable to Tori Amos and early Bjork (even though she’s mentioned that her music isn’t particularly inspired by them), Folick is one 2018 artist who can actually SING.

And that’s not to mention Folick’s image, which was quickly established with the release of that video. Throughout the video’s five minutes, Folick is framed in a medium close-up, capturing her serious expression, her shaved head (inevitably inviting comparisons to artists like Sinead O’Conner) and the unwavering, piercing gaze that she holds throughout. There’s a clever juxtaposition between her and the people having fun around her–it shows that Folick’s here to be taken seriously. But near the end of the video, Folick breaks that cold, unsmiling character. Very briefly, we see flashes of happiness–a smile, joyful shouts, and jubilance–but right as the roller coaster completes its journey Folick returns to her stone-cold gaze, looking back at the camera before the video ends. With that, Folick shows us that she’s not someone who fucks around–her cold exterior is a calculated look for her. She knows how to have fun, but she’s not going to flash a smile just for us. She’s the one in complete control.

As one of our writers sums up about the video: “I felt that”. 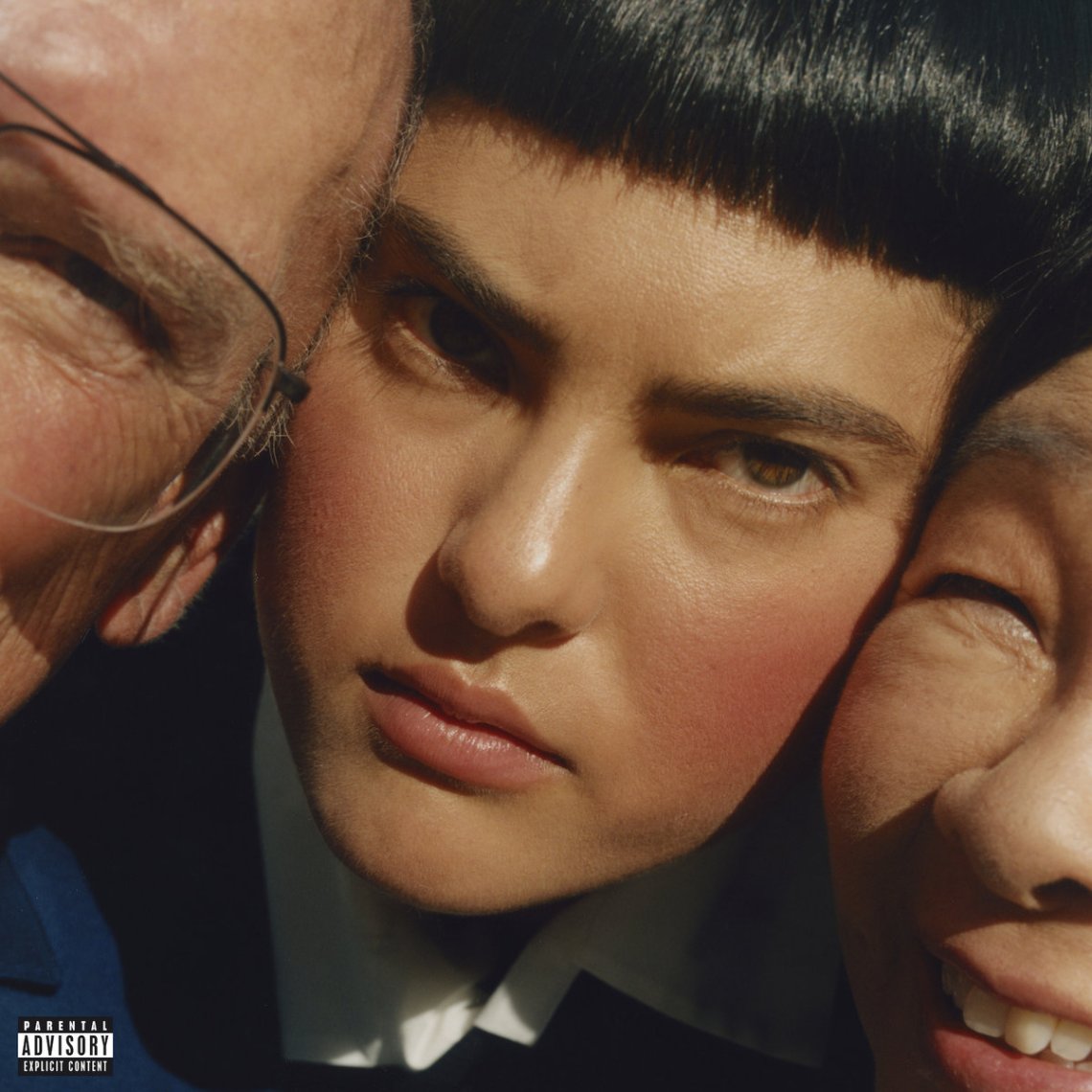 Although the incredible video for “Give It To Me” and her EP quietly slipped under most peoples’ radar in 2017, that wasn’t the case for Folick’s full-length debut, Premonitions. Dozens of musical blogs justifiably picked up on Folick’s potential to become a major star, and it’s no wonder–Premonitions is an addictive debut that takes that powerful voice and adapts it to a more pop-oriented sound, making it more digestible to casual music fans. It proves that Folick’s not just someone who can hit all the notes (she can), but she’s a great songwriter, too.

Half ballads, half addictive head-bobbing tunes, Premonitions is an album that has a little something for everyone. Much like that fateful ride she took in “Give It To Me”, the structural pace of Premonitions is quite similar to that of a roller coaster ride. The beginning and end of the album are slow, sentimental ballads, while the middle is more quick-paced and even anthemic. At its climax (“Leave the Party” through to “Freak Out”), Folick goes all out, hitting the highest of high notes with “Freak Out” before coming back down in “Deadbody” all the way through to the end. Happiness always seems brief for Folick, and she doesn’t seem to linger on it for too long before returning to her serious expression. (If you needed more evidence, take a look at the album cover for Premonitions, which finds Folick giving her inescapable, piercing gaze to the listener as she’s surrounded by her smiling parents.)

But despite appearances, Folick isn’t the hard-boiled, angry person that she might lead you to believe. Album opener “Thingamajig” (a very fun name for a song) immediately has Folick letting someone else take control of the reins, singing “I am sorry / I know I am wrong / So take it all / I want to be out of control” over a sparse beat and classical violins. The eponymous “Premonitions” and “Cost Your Love” are thematically similar, with Folick trying to prove herself to an unknown person or force that she addresses. The intensity of her image is lifted temporarily, and for the first time Folick asks for acceptance instead of demanding it. Touching lyrics like “Don’t make it easy on me / Don’t let me slide” and “I cave / I crawl / Right into your arms again / I hate it all / I can’t do this anymore” show that Folick is determined to prove herself to the world, even if it’s difficult. They’re raw and hit close to home, but come across very sincerely when paired with Folick’s flexible, mature voice.

“Stock Image”, one of the standouts of the album, seems to be a lyrical and autobiographical song (“Shave my head in your bathroom”, “Bathe myself in the afternoon / Won’t get out until the water’s cold and I am blue / I see it, I’m killing doubts”) about Folick’s own journey into becoming more comfortable in her own skin. In a sense, she helps her listener come to terms with their own individuality, chiding them for “feeling empty outside of [their] outline” and for hiding “in the bones of a stock image”. It’s yet another surprisingly tender moment in Folick’s vivacious discography.

But right when you think that Folick’s completely softened up, she comes back with full force on pop bangers like “Leave the Party”, “Stop Talking”, and “Freak Out”. After four songs of deep introspection, it’s a welcome change of pace–these are songs that are catchy and so hook-filled that they draw you back in immediately.

Folick’s at her best here, since for the first time, it sounds like she’s having fun. It’s easy to forget that Folick’s still just a twenty-something year old artist (she doesn’t like to reveal her age anymore) because of her vocal talent, but these three songs remind you that she’s still in her prime. Just take a listen to what she sings about: “Leave the Party” is about making an Irish exit from a party when you’re not having fun, “Stop Talking” tackles the same topic as Carly Rae Jepsen’s “Boy Problems” (she wants her friend to stop talking about a boy), and “Freak Out” is an over-the-top take on… well, freaking out. These three songs lift the mood of the album significantly, injecting life into it. Without them, Premonitions wouldn’t have much range–which would’ve been a shame since Folick really gets to exercise her vocals on these three songs. The last two songs on the record, “Baby Girl” and “What We’ve Made” are sweeping and sentimental, but they never again reach the heights of “Freak Out” or “Leave the Party”.

Perhaps the most confessional song on the album is also the most politically charged one on the record: “Deadbody”. Inspired by people’s exploitations by others and abusive power structures (and perhaps unlocking the reason why she doesn’t like to be portrayed smiling), “Deadbody” is a fierce stand against being taken advantage of, and Folick’s powerful voice once again finds its place here. “I need you to know I’m not powerless /My strength lies within my gentleness”, she proudly proclaims. “Deadbody” is the battle cry that makes that clear.

Taken as a whole, Premonitions is a showcase of Folick’s incredible range, tackling subject matters close to her and universal ones alike. Despite appearances, there’s more to her than just anger or intensity. Her debut is like a roller coaster that we can’t wait to ride over and over again–not just a straight drop, but ups-and-downs and everything around. Whether it’s dancing around to “Freak Out”, feeling invincible to “Deadbody”, or appreciating the quiet contemplation of “What We’ve Made”, I think all of her listeners will agree–“I felt that”.